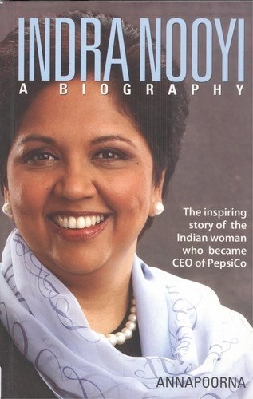 Indra Nooyi is an inspiring figure. She holds out hope for all young women, especially those from developing countries. After all, her journey started in India back in the 1950s and 60s. She hailed from a middle-class family in Chennai and dared to dream big at a time when women’s career choices were still mainly limited to secretary and teacher posts.
Indra Nooyi: A Biography chronicles the life of this corporate achiever. Indra Nooyi earned her management degree from IIM, Calcutta and was later accepted at the Yale School of Management. After completing her Master’s Degree in Public and Private Management in 1980, she joined the Boston Consulting Group. She joined PepsiCo in 1994 and since then, her rise has been meteoric. She became the company’s CFO and led the strategic acquisition of Tropicana and the merger with the Quaker Oats Company. These initiatives added a line of health food products to a company that has traditionally been associated with fun food.
The book traces her life from the early years in Chennai, to her struggles to establish herself in the corporate world. It follows her journey from the times she moved to the US, got married and continued her steady rise till her current position as the CEO of the second largest food-and-beverage company in the world. Indra Nooyi: A Biography was published by Rajpal as a paperback in 2013.

The author has used interviews, profiles and write-ups available in public forums to chronicle the life of this interesting personality.

Indra Nooyi: A Biography pieces together information from different sources to highlight the vital roles played by Indra Nooyi’s mother and later her husband and children in her life.

Be the first to review “Indira Nooyi : A Biography” Cancel reply