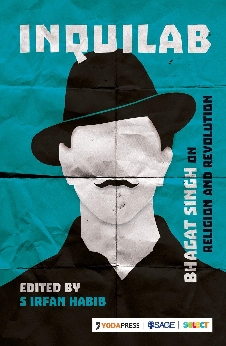 Extolled for his extraordinary courage and sacrifice, Bhagat Singh is one of our most venerated freedom fighters. He is valourised for his martyrdom, and rightly so, but in the ensuing enthusiasm, most of us forget, or consciously ignore, his contributions as an intellectual and a thinker. He not only sacrificed his life, like many others did before and after him, but he also had a vision of independent India.

In the current political climate, when it has become routine to appropriate Bhagat Singh as a nationalist icon, not much is known or spoken about his nationalist vision. Inquilab: Bhagat Singh on Religion and Revolution provides a corrective to such a situation by bringing together some of Bhagat Singh’s seminal writings on his pluralist and egalitarian vision. In doing so, it compels the reader to see that while continuing to celebrate the memory of Bhagat Singh as a martyr and a nationalist, we must also learn about his intellectual legacy. This important book also makes a majority of these writings, hitherto only available in Hindi, accessible for the first time to the English-language readership.

Be the first to review “Inquilab: Bhagat Singh On Religion & Revolution” Cancel reply