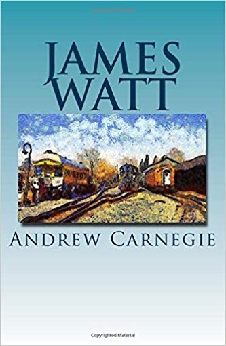 James Watt by Andrew Carnegie, is a classic science and technology biography about the great Scottish inventor.James Watt FRS FRSE (30 January 1736 (19 January 1736 OS) ? 25 August 1819)[1] was a Scottish inventor, mechanical engineer, and chemist who improved on Thomas Newcomen’s 1712 Newcomen steam engine with his Watt steam engine in 1781, which was fundamental to the changes brought by the Industrial Revolution in both his native Great Britain and the rest of the world.While working as an instrument maker at the University of Glasgow, Watt became interested in the technology of steam engines. He realised that contemporary engine designs wasted a great deal of energy by repeatedly cooling and reheating the cylinder. Watt introduced a design enhancement, the separate condenser, which avoided this waste of energy and radically improved the power, efficiency, and cost-effectiveness of steam engines. Eventually he adapted his engine to produce rotary motion, greatly broadening its use beyond pumping water.Watt attempted to commercialise his invention, but experienced great financial difficulties until he entered a partnership with Matthew Boulton in 1775. The new firm of Boulton and Watt was eventually highly successful and Watt became a wealthy man. In his retirement, Watt continued to develop new inventions though none was as significant as his steam engine work. He died in 1819 aged 83.He developed the concept of horsepower, and the SI unit of power, the watt, was named after him.James Watt was born on 19 January 1736 in Greenock, Renfrewshire, a seaport on the Firth of Clyde.[5] His father was a shipwright, ship owner and contractor, and served as the town’s chief baillie,[6] while his mother, Agnes Muirhead, came from a distinguished family and was well educated. Both were Presbyterians and strong Covenanters.[7] Watt’s grandfather, Thomas Watt, was a mathematics teacher and baillie to the Baron of Cartsburn.[8] Despite being raised by religious parents, he later became a deist.Watt did not attend school regularly; initially he was mostly schooled at home by his mother but later he attended Greenock Grammar School.[11] He exhibited great manual dexterity, engineering skills and an aptitude for mathematics, while Latin and Greek failed to interest him. He is said to have suffered prolonged bouts of ill-health as a child.When he was eighteen, his mother died and his father’s health began to fail. Watt travelled to London to study instrument-making for a year, then returned to Scotland, settling in the major commercial city of Glasgow intent on setting up his own instrument-making business. He made and repaired brass reflecting quadrants, parallel rulers, scales, parts for telescopes, and barometers, among other things. Because he had not served at least seven years as an apprentice, the Glasgow Guild of Hammermen (which had jurisdiction over any artisans using hammers) blocked his application,[13] despite there being no other mathematical instrument makers in Scotland.Watt was saved from this impasse by the arrival from Jamaica of astronomical instruments bequeathed by Alexander Macfarlane to the University of Glasgow, instruments that required expert attention.[15] Watt restored them to working order and was remunerated. These instruments were eventually installed in the Macfarlane Observatory. Subsequently three professors offered him the opportunity to set up a small workshop within the university. It was initiated in 1757 and two of the professors, the physicist and chemist Joseph Black as well as the famed Adam Smith, became Watt’s friends.

Be the first to review “James Watt” Cancel reply