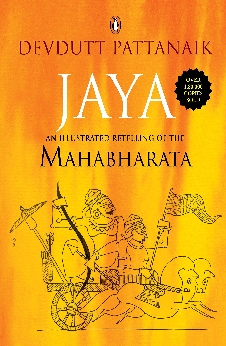 Jaya: An Illustrated Retelling Of The Mahabharata

Jaya: An Illustrated Retelling Of The Mahabharata has the whole epic, which was originally known as Jaya, condensed into a tiny capsule in this book. Other than retelling the interesting parts of the Mahabharata, what makes this book a favourite among the readers is Pattanaik rendering of the various local folklores and tales that are associated with the epic, which have been presented in a whole new genre. With a master stroke, the author has elaborated the storyline by including lesser known folklore stories of the epic, while keeping intact its original form and style.

The book has been divided into 108 chapters and has vivid illustrations along with 250 simple line drawings painted by Pattanaik himself. Besides infusing the different tales from local versions of the epic, the author has also added folk arts aspects picked up from ‘Yakshagana’ in Karnataka, ‘Terukuttu’ in Tamil Nadu and ‘Pandavani’ in Chattisgarh to blend with the narrative.

Stories of Barbareek, Aravan, Astika, Madhavi and Jaimini form a special portion of this book. Other than this, Pattanaik has also introduced some intriguing ongoing traditions, like the worship of Draupadi in temples of Tamil Nadu.

Along with this, a whole section has been devoted to the Kurukshetra war described on the basis of descriptive astronomical information. By infusing these interesting details along with the various local versions of the epic, the author has attempted to create a pan-Indian version of the epic that has, since times immemorial, helped in shaping the culture and history of the whole country.

Be the first to review “Jaya: An Illustrated Retelling Of The Mahabharata” Cancel reply