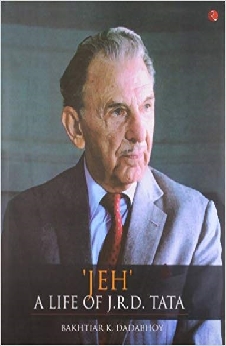 Pioneer aviator, numero uno industrialist, institution-builder, philanthropist and manager par excellence, J.R.D. Tata was a nation builder who continues to be a source of inspiration to both young and old. Having placed India on the aviation map of the world with his pioneering flight in 1932, he went on to guide the destiny of his brainchild Air India with the same enthusiasm and eye for perfection which informed his other ventures.
As an industrialist, JRD is credited with placing the Tata Group on the international map. Apart from being a businessman par excellence, he was a patron of the sciences and the arts, a philanthropist and yet a man with a passion for literature, fast cars, skiing and flying. As a philanthropist, he was respected for building and keeping alive the tremendously active Tata charitable trusts and adding some of his own. As a founder of institutions he played a seminal role in the founding of Tata Institute of Social Sciences, Tata Institute of Fundamental Research and the National Centre for the Performing Arts among many others and advocated family planning long before anybody had visualized that population would be a problem.
But it is as an inspirer of men that JRD will always be remembered. With an uncanny knack for selecting the right man for the right job, his greatest achievement lay in his ability to weld a team and get the best out of persons who differed greatly in outlook, character and ability. Filled with an unmistakable zest for life, his desire to instil and inspire a spirit of initiative and enterprise was always evident and he led those working for and with him, in the only way he knew: with affection.

Be the first to review “Jeh: A Life Of J.R.D. Tata” Cancel reply