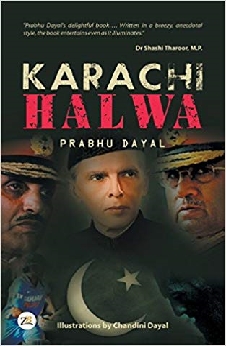 Why would Zia want to climb five floors of a hotel? Why did someone think Zia could fix his TV? Was Zia practicing urine therapy? What did Christopher Lee and Alyque Padamsee have in common? KARACHI HALWA is a witty but insightful portrayal of Zia ul Haq’s rule in Pakistan. Ambassador Prabhu Dayal shares his recollections of that period and keeps you laughing throughout his account of the bumpy ride of Pakistan’s domestic politics and its relationship with India. He tells you how a Sahiwal cow was brought into the equation, and where an elephant comes in. He says, ‘The past, the present and the future are in one continuous motion. Whatever I witnessed in Pakistan during Zia’s rule extends its long shadow not only over the present times but will do so well into the future also’. He poses the ultimate question whether the two South Asian giants can live as friends, offering his own suggestions.

Be the first to review “Karachi Halwa” Cancel reply