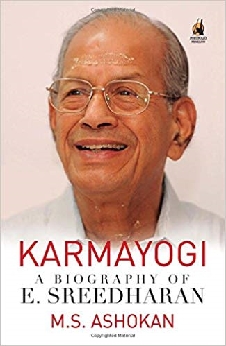 Karmayogi: A Biography Of E. Sreedharan

Karmayogi is the dramatic and inspiring story of E. Sreedharan, the much-admired engineer and technocrat who won accolades for finishing the Delhi Metro project within budget and on time, in the face of severe constraints. Known for his efficiency and discipline and regarded the world over for his productivity standards, Sreedharan has, surprisingly, never spent more than the eight-hour workday in office. This fascinating book looks back on an extraordinary career full of sterling achievements-Sreedharan’s years with the Railways, the building of the Kolkata Metro and the Konkan Railway, followed by the Delhi Metro, and the many metro projects he is involved with now. Translated from a bestselling biography in Malayalam, this is the uplifting story of a very private person who has become an icon of modern India because of his uncompromising work ethic.

Be the first to review “Karmayogi: A Biography Of E. Sreedharan” Cancel reply