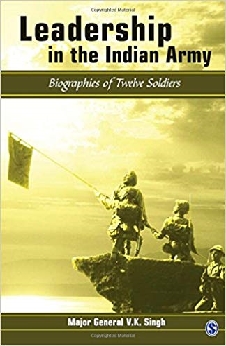 Leadership In The Indian Army: Biographies Of Twelve Soldiers

Spanning over 60 years of military leadership in India, this unique book brings to life the human side of twelve exceptional military leaders. Unlike traditional biographies of combat leaders which focus primarily on military operations or regimental histories, the author concentrates on personal accounts, anecdotes and reminiscences in order to highlight these leaders’ personalities, and to draw out the human face behind the military facade. The author argues that written records tend to glorify the actions of battalions as well as individuals, magnifying achievements while suppressing the mistakes and glossing over failures. This book, on the other hand, provides a truer picture of the strength of character and convictions of each of these leaders.

The book throws new light on many historical events and the role of political leaders during India’s fight for independence and the partitioning of the subcontinent. The author gives an overview of India’s military history after independence, including major operations such as the wars with China in 1962, and with Pakistan in 1947, 1965 and 1971. He describes many hitherto unknown or little known facts and incidents concerning smaller operations like Nathu La in 1967 and Goa in 1962.

Leadership in the Indian Army Reviews

Be the first to review “Leadership In The Indian Army: Biographies Of Twelve Soldiers” Cancel reply