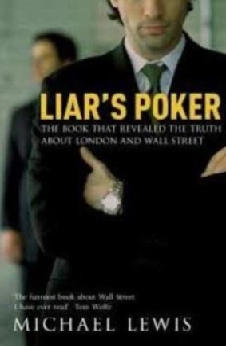 Liar’s Poker is a non-fiction, semi-autobiographical book by Michael Lewis describing the author’s experiences as a bond salesman on Wall Street during the late 1980s.[1] First published in 1989, it is considered one of the books that defined Wall Street during the 1980s, along with Bryan Burrough and John Helyar’s Barbarians at the Gate: The Fall of RJR Nabisco, and the fictional The Bonfire of the Vanities by Tom Wolfe. The book captures an important period in the history of Wall Street. Two important figures in that history feature prominently in the text, the head of Salomon Brothers’ mortgage department Lewis Ranieri and the firm’s CEO John Gutfreund.

The book’s name is taken from liar’s poker, a high-stakes gambling game popular with the bond traders in the book.

The first thread is autobiographical, and follows Lewis through his college education and his hiring by Salomon Brothers (now a subsidiary of Citigroup) in 1984. This part of the book gives a first-person account of how bond traders and salesmen truly work, their personalities, and their culture. The book captures well an important period in the history of Wall Street. Important figures in that history feature prominently in the text: John Meriwether, mortgage department head Lewis Ranieri, and firm CEO John Gutfreund.

The second thread is a history of Salomon Brothers and an overview of Wall Street in general, especially how the firm single-handedly created a market for mortgage bonds that made the firm wealthy, only to be outdone by Michael Milken and his junk bonds. This thread is less dependent on Lewis’ personal experience and features quotes apparently drawn from interviews with various relevant figures.

Lewis jumps back and forth between these two threads in the book.

Be the first to review “Liar’s Poker” Cancel reply