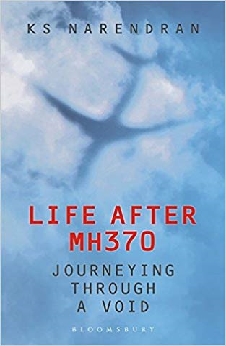 Life After MH370: Journeying Through A Void

There are at least 239 stories waiting to be told at length ? those of the families of 239 passengers of MH370, how their lives took a turn on March 8th 2014 when MH370 disappeared.
This is the story of one person, Naren, who lost his wife, Chandrika on that flight.
The probability of survivors diminished with each passing day. As the months went by, Naren remained pre-occupied, wrestling over what to believe. Some friends argued insistently against doomsday conclusions and spoke of their dreams as the basis to keep up hope. Many others, including Naren’s daughter, preferred silence over predictions. The one argument against which there was no counter was: Where is the evidence? Where is the debris? Where are the passengers?
Life After MH370 documents Naren’s experience with loss, grief, trauma and sorrow. The struggle with ‘ambiguous loss’ morphs into a ceaseless search, for the scent of a cover-up, for the truth, for that explanation that satisfies and helps one move on. A loss that meant critically resizing shared dreams, reconfiguring relationships and attempting to find a purpose that anchor him in the present.
There is the hint of a promise in KS Narendran’s story ? of existential truths about living and dying that might help anyone who comes upon this book.

Be the first to review “Life After MH370: Journeying Through A Void” Cancel reply