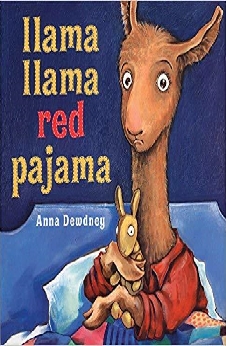 Mother Llama reads aloud a bedtime poem to her baby Llama and as the lights are turned off a whole new drama begins. The sweet little baby Llama is tucked into bed nicely by her mother. But when mother Llama goes downstairs to fetch something, baby Llama starts worrying. He whimpers in his soft sound which turns into a holler when he did not see that his mother is coming back. Fortunately, mother Llama is not gone for long. She returns back and set things right. Many children can find that baby Llama is similar to them, while the reassuring message from mother Llama can be appreciated by the parents.
Llama Llama Red Pajama has bedtime stories for children along with lots of pictures. The book is about a young child who has difficulty in sleeping and also about a mother who provides comfort. There are only two characters in the book, namely Mother Llama and baby Llama. The story is told in rhythmic form and emotions of the baby are heart touching. He wants to sleep and calls his mother for water. When his mother comes back, she gives a light scolding by saying, “please stop all this Llama drama and be patient for your mama”. Llama Llama Red Pajama was written by Anna Dewdney and was published in hardcover by Viking in 2005.
Key Features:
Llama Llama Red Pajama is a poetically written book which addresses the issue of sleeping problems faced by little children and how their parents deal with it.