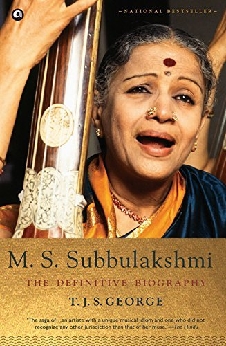 M. S. Subbulakshmi (1916-2004), who was popularly known as MS, was one of India’s greatest classical musicians. Born into a humble devadasi home, her talent and dedication to her art made her one of India’s most critically acclaimed classical singers. She was the first Indian musician to receive the Bharat Ratna, the country’s highest civilian honour, in addition to numerous other awards. Jawaharlal Nehru called her ‘a Queen of Music’ and Sarojini Naidu dubbed her ‘the Nightingale of India’. Her fellow musicians were no less generous in their praise. Ustad Bade Ghulam Ali Khan said she was Suswaralakshmi (the Goddess of the Perfect Note) while Kishori Amonkar said she was Aathuvansur or music’s ‘Eighth Note’ (there are only seven notes that are basic to all musical forms). MS’s genius had principally to do with her exquisite voice, her extraordinary range and her unequalled command of all the material she worked with, whether it was Carnatic music, Hindustani music or devotional music such as bhajans.
In this, the definitive biography of the musician (previously published as MS: A Life in Music), award-winning biographer T. J. S. George traces her journey from her beginnings as a singer in Madurai, through her breakthrough performance at the prestigious Madras Music Academy in 1932, to her carving out a place for herself as a cultural icon. Besides exploring MS’s genius, the author describes the musical and social milieu that she was part of, and the various barriers she was instrumental in breaking in the course of her journey to superstardom. He covers her stint as an actress and looks at how her career was helped by various mentors and sponsors, including C. Rajagopalachari, India’s last governor general. He pays particular attention to the role of her husband, T. Sadavisam, in the creation and burnishing of MS’s reputation. He examines the various controversies that surrounded her origins, and also underlines her essential humility and generosity. Told with a music connoisseur’s passion and understanding, M. S. Subbulakshmi: The Definitive Biography is an enthralling portrait of a musical legend.

Be the first to review “M. S. Subbulakshmi: The Definitive Biography” Cancel reply