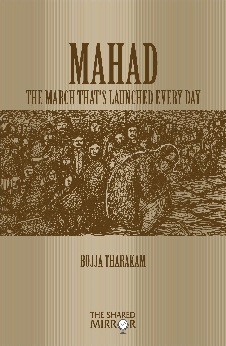 There are great marches in history, in Biblical lore?
Moses led his people across the sea to liberation. It took him forty years to lead his people to the Promised Land.
Ambedkar led his people to Mahad for equality through the barbaric caste system. The first phase of the march was between 19 March, 1927 andto 25 December, 1927. The second phase was between 26, December andto 17 March, 1937.
Gandhi led his Sabarmati ashramites to Dandi, starting on 12 March, 1930 and ending on 6 April, 1930, to defy an unjust alien law.
Mao led his people through a long march to revolution from Yangtze to Yenan starting on 16 October, 1934 and ending on 19 October, 1935.
There are marches and marches?
Workers march, peasants march, labourers march, soldiers march?
They march for liberty, for equality, and for freedom.
Mahad and Dandi are two such marches.
Dandi is known to many, only a few know Mahad

Be the first to review “Mahad: The March That’s Launched Every Day” Cancel reply