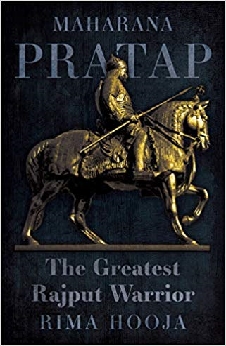 More than 400 years after his death, Maharana Pratap is still revered as the supreme symbol of Rajput valour, the indomitable warrior who refused to bow to Mughal emperor Akbar as he fought alone and unaided to preserve his kingdom’s independence.
In this stirring retelling of his life, replete with tales of incredible heroism and sacrifice as well as vicious intrigue and murder, renowned historian of Rajasthan Rima Hooja also examines the questions that still engage popular imagination: Who actually won the Battle of Haldighati? How did Maharana Pratap manage to elude capture by the mighty Mughal army for so long? And why did he stubbornly continue to fight on, suffering years of great hardship as he refused to negotiate peace with Akbar? Based on historical sources and contemporary court chronicles but also drawing on Mewari ballads, folklore and legends, this deeply researched yet accessibly written biography of Maharana Pratap is a compelling read.

Be the first to review “Maharana Pratap: The Greatest Rajput Warrior” Cancel reply