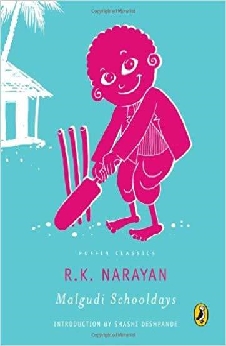 Set in India’s pre-independent era, in a sleepy fictitious town, Malgudi, Malgudi Schooldays (Puffin Classics) revolves around the adventures of a typical school boy named Swami. His notorious gang of friends, include Mani, Somu, Samuel, Pea, Sankar and the latest entry, Rajam. Swaminathan is a boy who shudders at the very thought of school.
Swami’s days are filled with action. He is either creating an uproar in the classroom or making preparations for passing his exams in a short cut method. He loves running down the streets of Malgudi with the coachman’s son’s hoop. He enjoys playing pranks, especially on his grandmother. Inspired by a vibrant Swadeshi demonstration, he even stones the school windows. His antics also include gazing at trains and entertaining himself with different hairstyles and caps.
The much awaited Malgudi Cricket Club is organized and Swami is chosen to be the team’s bowler. A superstar of the team, Swami is posed with a major problem. He has to be present at the school drill and the cricket coaching at the same time. On the day of the prestigious match with the neighboring Young Men’s union, things go terribly wrong. What will Swami do now?
Malgudi Schooldays (Puffin Classics) was published by Penguin India in 2009 and is available in paperback.
Key Features:
This book is an abridged version of the celebrated novel, Swami and Friends.
Doordarshan had telecast these stories as a serial.

Be the first to review “Malgudi Schooldays” Cancel reply