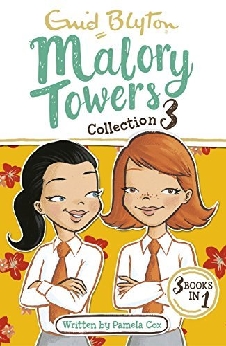 For new girl Darrell Rivers, there are friends to be made, pranks to be played and fun to be had at Malory Towers in Enid Blyton’s best-loved boarding school series.
New Term
Darrell has left Malory Towers and her sister Felicity takes over as head girl. But the other girls are determined to cause trouble. Will Freddie and June ever stop playing tricks? And what’s Amy’s strange family secret?
Summer Term
Someone has stolen Julie’s horse. And there’s money missing too. Can Felicity and the girls find out who would do such a terrible thing?
Winter Term
Susan’s in charge of the winter concert, but new teacher, Miss Tallant, won’t let her make any decisions. When Miss interferes in a midnight feast, the girls realise that there’s a spy in their midst.
Expect drama at Malory Towers!
Between 1946 and 1951, Enid Blyton wrote six novels set at Malory Towers. Books 7-12 are authorised sequels of the series written by Pamela Cox in 2009 and focus on the adventures of Felicity Rivers, Susan Blake, and June Johns. This collection features the original stories and is unillustrated.

Be the first to review “Malory Towers Collection 3” Cancel reply