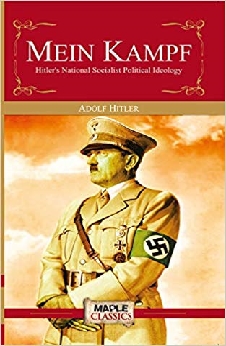 “For years, Mein Kampf stood as proof of the blindness and complacency of the world. In its pages Hitler announced long before he came to power- a program of blood and terror in a self-revelation of such overwhelming frankness that few had the courage to believe it. . . . That such a man could go so far toward realizing his ambitions- that is a phenomenon the world will ponder for centuries to come. “- Konrad Hidden, author of The Fuhrer: Hitler’s Rise to Power.

Mein Kampf is the written words of one of history’s most important figures, Adolf Hitler, “My Struggle” was taken down in prison where Hitler was incarcerated for his failed coup in 1923. The book was originally entitled Four Years of Struggle against Lies, Stupidity and Cowardice. Hitler’s publisher reduced it to My Struggle(Mein Kampf). The book is a mixture of autobiography, political ideas and an explanation of the techniques of propaganda.

Be the first to review “Mein Kampf” Cancel reply