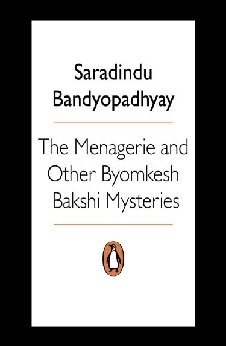 Menagerie And Other Byomkesh Bakshi Mysteries

An irresistible volume for crime fiction enthusiasts When, in 1932, Saradindu Bandyopadhyay decided to try his hand at detective fiction?looked down upon in Bengali literary circles of that time as frivolous ventures?he scarcely expected Byomkesh Bakshi to become one of the most popular and enduring creations in Bengali literature. Although largely modeled on such greats as Conan Doyle’s Holmes and Chesterton’s Father Brown, Byomkesh’s appeal as the self-styled inquisitor, a detective not by profession but by passion, found him a dedicated following among generations of readers. The present collection of stories, all set in Calcutta of the fifties and sixties, brings together four mysteries that put the sleuth’s remarkable mental agility to the ultimate test. In The Menagerie (adapted by master film-maker Satyajit Ray for his 1967 film Chiriakhana) Byomkesh cracks a strange case involving broken motor parts, a seemingly natural death and the peculiar inhabitants of Golap Colony who seem capable of doing just about anything to safeguard the secrets of their tainted pasts. In The Jewel Case he investigates the mysterious disappearance of a priceless necklace, while in The Will That Vanished he solves a baffling riddle to fulfil the last wish of a close friend. And in The Quills of the Porcupine, the shrewd detective is in his element as he expertly foils the sinister plans of a ruthless opportunist. Sreejata Guha’s translation captures brilliantly the thrill and ingenuity of Byomkesh’s exploits just as it does Bandyopadhyay’s remarkable portrayal of a city struggling to overcome its colonial past and come into its own.

The Menagerie and Other Byomkesh Bakshi Mysteries Reviews