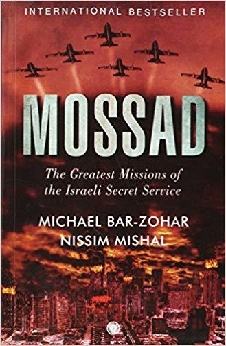 This is the true story about the great missions of Israeli secret service. The book gives a thorough knowledge about the types of adventurous undertakings taken up by the Mossad for the sake of their country. For years and years Israel’s well-known security arm, the Mossad, has been broadly known as the best intelligence service in the world. In this book the author takes us through the exciting, eye-opening accounts of the most dangerous, most critical tasks undertaken by the agency for last 60 years.
The book talks about the incredible stories full of action right from the capture of Nazi assassin Adolph Eichmann to the recent removal of key Iranian nuclear scientists. The book is very useful for all those who want to know about the world. It is an excellent collection of case works and narration Mossad’s activities. It is a good read for those who like to know about real life dangerous missions of Intelligence agencies.

About the author
Michael Bar-Zohar was born in Bulgaria and he immigrated to Israel in 1948. He attended High School in Tel Aviv and went on to study economics and international relations at the Hebrew University of Jerusalem. He also studied at the Institute of Political Science in the University of Paris, where he earned a PhD. He is an Israeli historian, novelist and politician. He was a member of the Knesset on behalf of the Alignment and Labor Party in the 1980s and early 1990s. In 1965 Bar-Zohar won the Sokolov Award for his achievements as a journalist. He published several books, including biographies of David Ben-Gurion and Shimon Peres, several books about the Israeli security organizations and an account of the rescue of Bulgarian Jews from the Nazis in World War II.
Nissim Mishal is one of the foremost TV personalities in Israel. After graduating with a master’s degree in political science, he joined the staff of the Israeli state television and worked as a political reporter, Washington correspondent and, finally, director-general. At the fiftieth and sixtieth anniversaries of Israel, Mishal published two record-selling books about the great events in Israel’s history. They were translated into English, French, Russian and Spanish. He has also coauthored a book on two thousand years of Judaism with Professor Shlomo Ben-Ami, a former Israeli minister of foreign affairs.

Be the first to review “Mossad” Cancel reply