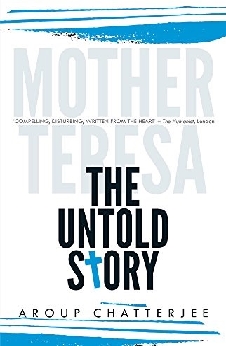 Aroup Chatterjee is a British Indian author and physician. He was born in Kolkata (Calcutta), India, and moved to the United Kingdom in 1985. He is the author of the book Mother Teresa: The Untold Story (originally published as Mother Teresa: The Final Verdict), a work which challenges the widespread regard of Mother Teresa as a symbol of philanthropy and selflessness.

In December 2002 independent publisher Meteor Books published Chatterjee’s book under the title Mother Teresa: The Final Verdict. In 2016 the same book was reissued under a new title, Mother Teresa: The Untold Story by Fingerprint! publishers. The book covers her life and her rise to fame following the documentary Something Beautiful for God by Malcolm Muggeridge, the Calcutta home for the dying and the practices of running it, the non-consensual death bed conversions of Hindus and Muslims and the vast amount of financial donations given to the charity but not spent at Nirmal Hriday. He covers her Nobel Peace Prize and the speech in which she claimed to have saved tens of thousands of destitute people; Chatterjee estimates in his book the real number was 700. He also writes about the celebrities and the powerful people who had audiences with her, and the controversies surrounding the money she accepted from dictators such as Haitian president Jean-Claude Duvalier, convicted fraudster Charles Keating and disgraced publisher Robert Maxwell. The book looks at the worldwide reach of the Missionaries of Charity and examines the available evidence for her financial accounts and her personal crusade against abortion and contraception. The final chapters address her death, funeral and beatification and Chatterjee’s own involvement as an official devil’s advocate or hostile witness and the transcripts of the proceedings.

The book has received both criticism and praise. It has been described variously as a “necessary, well-documented book” (Times Higher Education), “this important book” (The Open Society journal) and “an irrational attack” (Catholic League for Religious and Civil Rights). Most however agree that the book is “extremely critical” of Mother Teresa.

Be the first to review “Mother Teresa: The Untold Story” Cancel reply