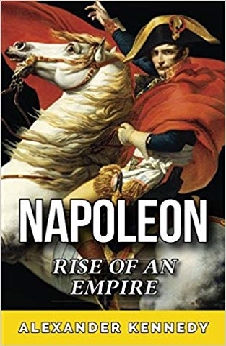 The most polarizing man of his era, Napoleon Bonaparte has remained a source of controversy ever since. Did his dictatorship crush the French Revolution, or carry its ideals to their logical conclusion? Was he a conqueror-tyrant who sought war for the sake of glory, or was he forced into conflict to defend his beloved France? Was he a throwback to sixteenth-century ?absolute monarchs,? or the great modernizer of nineteenth-century Europe? Or was he all of these things at once?
In this compact, highly readable biography, Alexander Kennedy examines these questions and more. He traces Napoleon?s history back to the bloody hillsides of Corsica, from his rise as a young artillery officer to the summit of greatness. We see at how Napoleon?s rule forever changed a continent, but also how his overreach led to his shocking fall from power. To understand the story of Napoleon, Hughes persuasively shows, is to understand Europe itself?both in Napoleon?s era and today.
“If you want a thing done well, do it yourself.” – Napoleon Bonaparte
Buy Now to Discover:
Napoleon?s tactics at Austerlitz, Waterloo, and other crucial battles.
How the French conquest of Corsica shaped Napoleon?s childhood.
Napoleon?s troubled marriage to the faithless Josephine.
The French invasion of Egypt and discovery of the Rosetta Stone.
The sale of Louisiana to the United States.
Napoleon?s 1814 suicide attempt.
The daring escape from Elba that allowed Napoleon to make his final stand.
Buy Now and Read The True Story of Napoleon Bonaparte…
Thank you in advance for buying our book. We know you’ll love it!

Be the first to review “Napoleon” Cancel reply