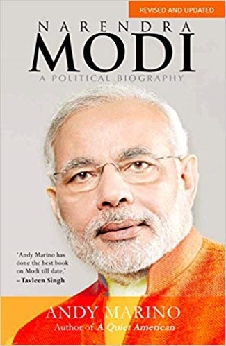 Indian Prime Minister Narendra Modi wrested a powerful victory for his party, has spoken at countless meetings and rallies and has acquired a global profile. Yet, the man remains an enigma. His supporters regard him as the visionary, decisive leader India needs today. His detractors see him as a polarizing figure. Is Modi authoritative or authoritarian? Decisive or divisive? A team player or a loner? Andy Marino recorded interviews with Narendra Modi during more than half-a-dozen exclusive meetings. What emerged is this riveting, objective biography. Not shying away from the controversies that have dogged Modi, including the Gujarat riots and questions about the Gujarat model of governance and development, this is an unbiased account of the most important figure in Indian politics today. The author analyses Narendra Modi’s values, the people who shaped his thinking and the kind of national leader he is. Personal details of Modi’s early life, his wanderings in the Himalayas between the ages of seventeen and nineteen, his rise through the political ranks, his vision for India and his personal philosophy on religion and politics are revealed in a book that is lucid, fast-paced and readable. This revised and updated edition includes a meticulously researched account of Modi’s intense campaigning and the run up to the sixteenth Lok Sabha elections, and the remarkable BJP-led NDA victory with 282 and 336 seats respectively. An unparalleled portrait of the man who wants to be remembered as the one who changed India for the better.

Be the first to review “Narendra Modi: A Political Biography” Cancel reply