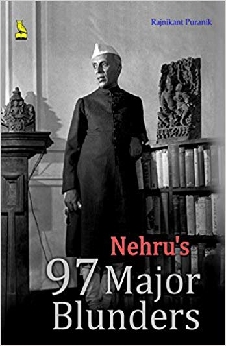 Those who do not learn from history are doomed to repeat it.
?George Santayana

But for a series of major blunders by Nehru across the spectrum?it would not be an exaggeration to say that he blundered comprehensively?India would have been on a rapidly ascending path to becoming a shining, prosperous, first-world country by the end of his term, and would surely have become so by early 1980s?provided, of course, Nehru’s dynasty had not followed him to power. Sadly, the Nehru era laid the foundations of India’s poverty and misery, condemning it to be forever a developing, third-rate, third-world country. By chronicling those blunders, this book highlights THE FACTS BEHIND THE FACADE.

This ‘Revised, Enlarged & Unabridged, June-2018 Edition’ of the book comprises (a)123 Major Blunders compared to 97 of the first Digital Edition of July 2016; (b)over twice the matter, and number of words; and (c)exhaustive citations and complete bibliography.

It is not the intention of this book to be critical of Nehru, but historical facts, that have often been distorted or glossed over or suppressed must be known widely, lest the mistakes be repeated, and so that India has a brighter future.