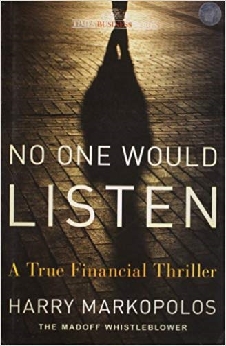 No One Would Listen: A True Financial Thriller

This is the story of Harry Markopoulos, the whistleblower who discovered that crimes against investors were being committed by Bernie Madoff, whose Ponzi Scheme would ultimately become the biggest and longest-running financial investment fraud in history. Madoff’s impact, both financially on individuals and institutions, continues to send shockwaves across the financial system and represents a major failure to investigate by the Securities and Exchange Commission (SEC), the nation’s top market copy. The unraveling of the Madoff investment fund will go down as the crowning story of an era that has ended with the most troubled, turbulent and uncertain global economy. How Madoff was enabled, by investors and fiduciaries alike, is nothing short of breath-taking and spell-binding. But how Madoff was allowed to operate by the SEC, despite repeated written and verbal warnings by whistleblower Harry Markopoulos, is something that can only be told Harry himself and his team of financial sleuths.
Table of Contents:
Introduction
Chapter 1: A Red Wagon in a Field of Snow
Chapter 2: The Slot Machine That Kept Coming Up Cherries
Chapter 3: Falling Down the Rabbit Hole
Chapter 4: Finding More Peters (to Pay Paul)
Chapter 5: The Goddess of Justice Wears a Blindfold.
Chapter 6: Didn’t Anyone Want a Pulitzer?
Chapter 7: More Red Flags Than the Soviet Union.
Chapter 8: Closing the Biggest Barn Door in Wall Street History.
Chapter 9: Soaring Like an Eagle Surrounded by Turkeys.
Epilogue: Mr. Pink slip Goes to Washington
Appendix A: Madoff Tops Charts, Skeptics Ask How
Appendix B: The World’s Largest Hedge Fund is a Fraud
Appendix C: Online Resource Guide for the Classroom and Beyond
A Note on Sources
About the Author
Acknowledgments
Index

No One Would Listen Reviews

Be the first to review “No One Would Listen: A True Financial Thriller” Cancel reply