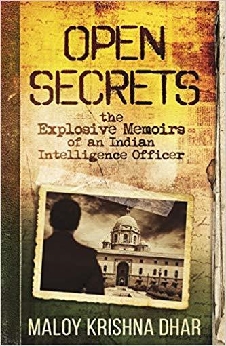 Open Secrets: The Explosive Memoirs Of An Indian Intelligence Officer

The #1 Indian bestseller when it was published in India in 2005, Open Secrets became an instant sensation. It became the #1 Non-Fiction bestseller, a position it held for many months and generated a firestorm of controversy. There were court cases, death threats against the author, intense debates in the media and a change in India’s Official Secrets Act after the issues raised in the book caused uproar in Parliament. All of this is in hindsight not surprising as Open Secrets was the first of its kind- the first time a retired Indian Intelligence Bureau Officer penned his memoirs- detailing his thirty-year career and offering unprecedented insights into some of the pivotal moments of Indian history and a peek into the political machinations that underly them. More than an expose, Open Secrets was a heartfelt plea for more transparency and accountability in India’s security and intelligence apparatus- to free them to serve and protect the people of India, and not just their political masters. That debate has special resonance today in the light of the growing popular movement demanding more transparency and less corruption in Indian public life. Open Secrets is regarded as a seminal work for its fearless exposure of the Indian political system and its insightful detailing of the course of modern Indian history’s turning points.

Be the first to review “Open Secrets: The Explosive Memoirs Of An Indian Intelligence Officer” Cancel reply