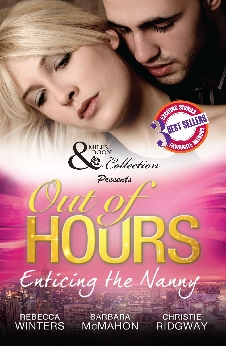 CEO Nick Wainwright can handle billion-dollar business deals, but a baby? Nick needs help and fast, but he never mixes business with pleasure, until delectable Reese Chamberlain enters his Park Avenue apartment. When Sam finds herself dancing with billionaire Mac McAlheny, she feels like Cinderella, but when the clock chimes twelve, reality strikes! Now jobless and looking for work, can she really become Mac’s new nanny when she’s already head-over-heels for her boss? Fireman Mick Hanson was a working single dad. He didn’t need another complication, but then he saw Kayla James in a different light. Until now, he’d managed to see her as ‘the nanny’. Now he wasn’t sure he could resist the electric attraction between them.

Out of Hours Reviews