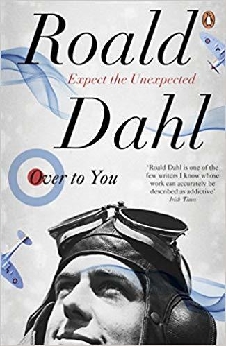 Over To You: Ten Stories Of Flyers And Flying

In Over to You, ten terrifying tales of life as a wartime fighter pilot are told by the master of the short story, Roald Dahl.
During the Second World War Roald Dahl served in the RAF and even suffered horrific injuries in an air crash in the Libyan desert. Drawing on his own experiences as a fighter pilot, Dahl crafted these ten spine-tingling stories: of air battles in the sky; of the nightmare of being shot down; the infectious madness of conflict; and the nervy jollity of the Mess and Ops room.
Dahl brilliantly conveys the bizarre reality of a wartime pilot’s daily existence, where death is a constant companion and life is lived from one heartbeat to the next.
‘One of the most widely read and influential writers of our generation’ The Times
‘The great magician’ Spectator

Roald Dahl, the brilliant and worldwide acclaimed author of Charlie and the Chocolate Factory, James and the Giant Peach, Matilda, and many more classics for children, also wrote scores of short stories for adults. These delightfully disturbing tales have often been filmed and were most recently the inspiration for the West End play, Roald Dahl’s Twisted Tales by Jeremy Dyson. Roald Dahl’s stories continue to make readers shiver today.

Over to You Reviews

Be the first to review “Over To You: Ten Stories Of Flyers And Flying” Cancel reply