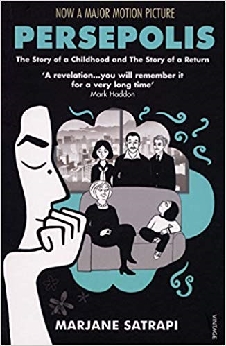 Persepolis is a rare work of fiction. It is a memoir in a graphic novel form. Marjane recounts her life in strife torn Iran from the 1970s to the 90s. She grew up in a country that was ravaged first by the Shah regime and later the fundamentalist regime. People were not free and not allowed to have any thoughts of their own. A teenaged Marjane forced to hide her liking for rock and roll music and jeans. She has to wear a headscarf while moving out of home and kowtow to the powers that be. Her fellow students are willing to see her prosecuted for wearing tight jeans. Any indulgence in unsavoury political thoughts could lead to detainment. In such a situation, how is Marjane to survive and be true to herself? As she mulls over her future, she get sound advice from her old grandmother who advises her to sprout wings and do exactly as she pleases.
Persepolis was highly acclaimed upon publication and became a critical success. It was first published in the form of four books in French. Upon success, the book was translated into many languages. It was published in English in the form of two books. The book was made into an animated feature film which used the same kind of illustration that Marjane used in the book. The film won prizes at Cannes film festival when it premiered there in 2007. Persepolis winds up in list of must-read books, feminist books and graphic novels. It is seen as one of the most influential works of modern times.
About the author:
Marjane Satrapi was born in Iran in 1969. When she was a young girl, in 1979, the revolution took place in Iran and it was taken over by the Muslim fundamentalists. She spent her life seeing the common people being persecuted by various regimes, first the Shah regime and then the fundamentalist regime. She saw her adored uncle Anoosh was imprisoned and executed. Her parents tried sending Marjane to study in Vienna but she was unhappy there. She returned to Iran to complete her studies. She moved to France and married a Swedish man, Mattias Ripa.
Her autobiographical novels have been immensely popular. She has written children’s books, directed films and has worked as an illustrator.

Be the first to review “Persepolis” Cancel reply