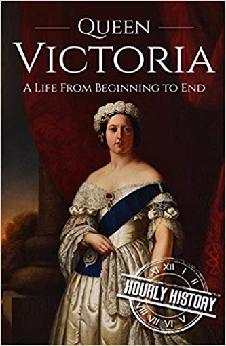 Queen Victoria: A Life From Beginning To End

Queen Victoria
The Queen of Great Britain and Ireland for 63 years, the mother of nine children and grandmother to 42, Queen Victoria?s life was one of magnificent proportions. Victoria?s childhood was difficult and lonely but from the time she took the throne aged just eighteen she blossomed into a powerful woman, both frivolous and formidable.
Inside you will read about…
– An Unsentimental Marriage- Race to Produce an Heir- Finally an Adult and Finally a Queen- V&A- Die Shattenseite- The Hungry Forties and Albert?s Great Exhibition- The Widow at WindsorAnd much more!In her later years, Victoria struggled to find balance between her wish to live a very private life as a widow and her duty to live the very public life of a Queen and later Empress. The world Victoria was born into was a very different world to that which she left behind and her life story is an incredible journey from infant heir to matriarchal Queen and Empress.

Be the first to review “Queen Victoria: A Life From Beginning To End” Cancel reply