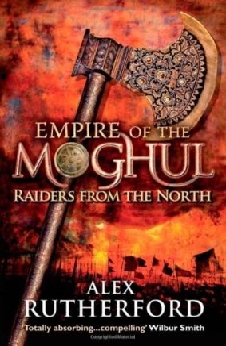 Raiders From The North

The mighty Empire of the Moghuls burst out of Central Asia into India in the sixteenth century. The first in a compelling new series of novels, Raiders from the North tells the largely unknown story of the rise and fall of the Mogul dynasties.

It is 1494 when the ruler of Ferghana dies in an extraordinary accident. His only son, Babur, faces a seemingly impossible challenge. Babur is determined to live up to the example of his legendary ancestor, Tamburlaine, whose conquests transformed the face of the earth from Delhi to the Mediterranean, from wealthy Persia to the wildernesses along the Volga. But Babur is dangerously young to inherit a kingdom.

Before Babur can summon enough warlords to declare him the rightful king, plots against his crown, even his life, are hatching. And soon, he will discover that even the bravest and most fearless leader can be betrayed. With the wisest of advisers and most courageous of warriors by his side, Babur can achieve a great destiny and found an empire in India, but every step of his journey will be fraught with danger.

Set in a world of tribal rivalries, rampaging armies, and ruthlessly ambitious enemies, Raiders from the North is historical adventure at its very best.

Raiders From The North Reviews

Be the first to review “Raiders From The North” Cancel reply