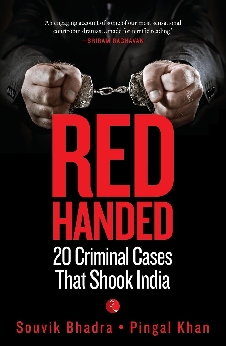 In late 2006, residents of Sector 31 of Noida, Uttar Pradesh, discovered the remains of a child in the open drain that bordered the colony. As the nation watched on in horror, the police uncovered the body parts of fifteen more children in the same location. These grisly killings were found to have been the handiwork of Surinder Koli, a serial killer who lived in a house nearby.
In Red-Handed: 20 Criminal Cases That Shook India, lawyers Souvik Bhadra and Pingal Khan narrate the stories behind some of the most sensational criminal cases to have caught the attention of the country in the last few decades. From the murder of Nitish Katara in a case of ‘honour killing’ to the shooting of Jessica Lal; from the Harshad Mehta scam to the Best Bakery arson of 2002; and, from the horrifying ‘tandoor’ case, in which Naina Sahni was killed and then cremated, to the trial and conviction of Sanjay Dutt under TADA, Red-Handed examines the motives behind these crimes even as it aims to lay bare the inner workings of the Indian judicial system. Additionally, the authors illuminate the crucial role that the media has come to play in judicial matters?it shapes public opinion, and often even investigates cases and delivers justice, much before the judges do.

Be the first to review “Red-Handed: 20 Criminal Cases That Shook India” Cancel reply