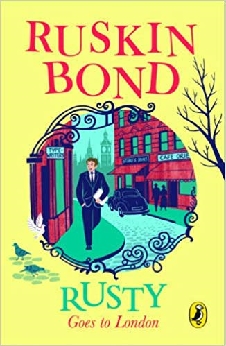 Rusty travels abroad to fulfil his dream of becoming a writer! In his early twenties now, Rusty finally leaves Dehra and books a passage to England, dreaming of writing and selling his novel abroad. First in Jersey, and then in in London, he works as a clerk by day and writes in the evenings. Eventually, the novel is finished and Rusty even finds a publisher. But this, he discovers, does not mean that his book will see the light of day soon. But London has many adventures in store for Rusty. Strolling down Baker Street, he runs into Sherlock Holmes, is accosted by Rudyard Kipling and has an escapade in the Chinese quarter! After three years abroad, however, Rusty realizes that he wants to make India his permanent home. Returning to Dehra, he renews some acquaintances and makes a few new ones, and settles into his role as full-time author. Full of interesting stories and memorable characters, Rusty Goes to London will delight all of Ruskin Bond’s fans.

Be the first to review “Rusty Goes To London” Cancel reply