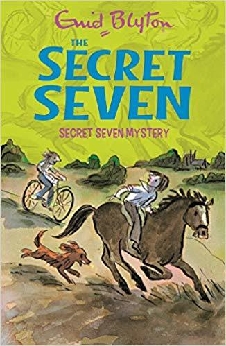 Secret Seven Mystery: 9 (The Secret Seven Series) is a children’s adventure story book. Part of the Secret Seven series, the book narrates one of the many adventures of the Secret Seven, a detective community made up of a group of children. Peter, Janet, Barbara, Jack, Pam, George and Colin make up the secret seven society and with peter as the leader of this group. The book narrates a particular case they encounter when a young girl named Elizabeth Sonning, accused of stealing money from her mistress, disappears. The gang comes together to study the situation. They split up looking for clues Peter and Jack head over to Elizabeth’s grandmother’s house, Barbara and Pam take to searching the woods, Colin decides to check out the barns and shelters in the neighbourhood, while George and Janet investigate the stables nearby enquiring about Elizabeth being spotted there.
At the grandmother’s house, Peter and Jack meet Mrs. Wardle who informs them of food and rugs that mysteriously disappear every night, while Tom, a stable boy at the Warner stable recollects to George and Janet about seeing someone around matching Elizabeth’s description. The gang heads back and groups in to discuss and understand their findings.
Meanwhile Jack’s sister Susie discovers some clippings of the girl in Jack’s room. Ever jealous of the Seven and determined to outfox them someday, Susie is on her quest to find Elizabeth before the detective gang. Will the gang be able to solve this mystery? What of the money that Elizabeth stole? This edition of Secret Seven Mystery: 9 (The Secret Seven Series) has been published in paperback by Hodder Children’s Books in 2007.

Be the first to review “Secret Seven Mystery” Cancel reply