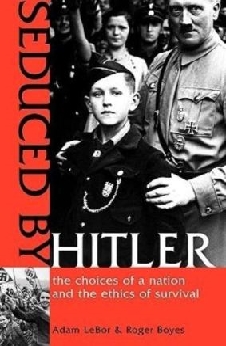 Drawing on new research and recently declassified documents, authors Adam LeBor, author of Hitler’s Secret Bankers, and Roger Boyes, The Times of London correspondent in Berlin, reveal a tapestry of ordinary lives lived under extraordinary circumstances-ranging from subversion and confrontation to passive acceptance and eager complicity.

Seduced by Hitler shows in startling detail how almost every waking hour of Hitler’s reign offered insidious choices-from degrees of compromise to outright resistance-to the average German in their interactions with each other and the regime, whether at work, home or leisure.

It may seem impossible to explain how an entire nation could allow itself to be seduced by a man such as Adolf Hitler. By examining the everyday lives of Germans under Nazi rule, the authors propose an explanation more complex, strange and morally ambiguous than one might imagine. In doing so, they bring to life the steady decline in national morality in the Third Reich as the German people let themselves be taken in by Hitler.

Be the first to review “Seduced By Hitler” Cancel reply