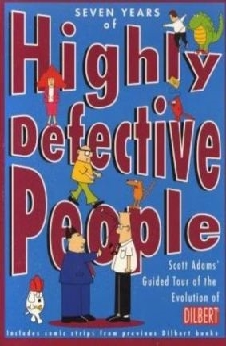 Since its debut in 1989, Dilbert has become the comic strip sensation, attracting fans from all corridors of working life. As Dilbert’s popularity has grown, so has curiosity about the man behind the drawing table. Seven Years Of Highly Defective People is filled with Scott Adams’ handwritten notes – notes that answer provocative questions such as, Which characters became unexpected “regulars”?, What objects are the most challenging to draw?, and Which strips became the biggest hits? This unique treasury is a tour of the origins and evolution of Dilbert’s cast, and your tour guide is Dilbert’s creator.

Each chapter chronicles a different character using selected cartoons (from previous books) to illustrate each one’s development. Scott Adams tells where the characters came from, why they do the things they do, and just what the heck he was thinking during the creative process. In his introduction, Adams says, “Some of the notes are fascinating insights into the world of cartooning. Other notes are interesting only for their poor grammar and spelling, thus proving that you can be a moron and still have a successful career as a cartoonist.” You’d have to be an “Induhvidual” to miss out on this special collection.