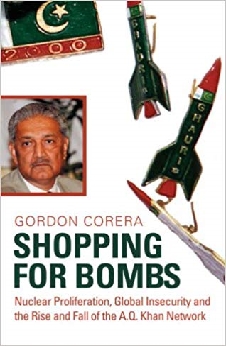 “Shopping for Bombs” presents the first detailed account of the emergence of Pakistan’s nuclear hero A.Q. Khan as the world’s leading black market salesman of nuclear weapons technology. It reveals the inside story of how he sold the most dangerous technology in the world to some of the world’s most dangerous states, including Iran, North Korea and Libya and how he talked to many more. In doing so it presents a detailed insight into Tehran’s nuclear ambitions and how A.Q. Khan allowed countries to shave years off the time needed to acquire nuclear weapons. The book, which is based on reporting and access to officials at the highest levels in Islamabad, London and Washington, reveals what was known of A.Q. Khan’s activities by Western governments and how he was eventually put out of business by an effective harnessing of intelligence and diplomacy and a careful navigating of America’s difficult relationship with Pakistan. It also provides the inside story on the deal to disarm Libya of its weapons of mass destruction and the critical role this played in dealing with Khan. The spread of nuclear weapons technology presents what must be the greatest security challenge of our time, and the story of A.Q. Khan opens a unique window allowing us to see just how difficult it is becoming to prevent a new nuclear arms race, a race which Khan himself will have done more than any other individual to promote.

Be the first to review “Shopping For Bomb” Cancel reply