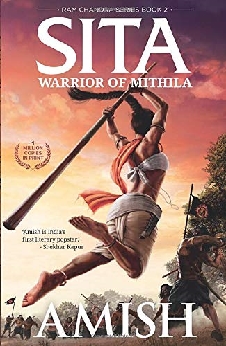 During a trip Janak, the king of Mithila and his wife Sunaina find a child on the road, being protected by a vulture. They adopt the child and name her Sita, for she was found in a furrow. Growing up Sita is sent to the ashram of Rishi Shvetaketu for her studies. There she learns about martial arts and gains knowledge on different subjects. She also makes friends with a girl Radhika, and her cousin Hanuman, who was a Vayuputra?the tribe left by the previous Mahadev, Lord Rudra. When Sita is 14 years old, Maharishi Vishwamitra?head of the Malayaputra tribe who serve the next Vishnu?visits Shvetaketu’s ashram. Impressed by Sita’s skills and knowledge, he elects her as the seventh Vishnu but asks her to keep it a secret. Sita also wins the trust of Jatayu, a Naga member of the Malayaputras.

After Sita returns to Mithila , she is bereaved with her mother Sunaina’s death. She also has to take care of her younger sister Urmila. With Janak being more engrossed in spiritual work, Sita is made the prime minister of Mithila. She is able and make many reforms in the kingdom with the help of her childhood friend Samichi, who served as the chief of the police force. After Mithila’s financial conditions stabilized, Sita visited the Malayaputra capital city of Agastyakootam to continue training for becoming the next Vishnu. However, she starts suspecting Vishwamitra’s reasoning for choosing her over Ram, who was the prince of Ayodhya and the son of king Dashrath the supreme ruler of India. Through Radhika she came to know that Ram was also being considered for becoming the next Vishnu by his mentor Rishi Vashistha?an old friend of Vishwamitra.

Sita plans a marriage alliance with Ram through a Swayamvar, but is enraged to learn that the Lankan king Raavan and his brother Kumbhakaran have also come there. She manipulates the situation with Vishwamitra so that Ram’s name is announced as the first suitor. Ram wins the Swayamvar and marries Sita, while his brother Lakshman marries Urmila. The next day, Raavan besieges Mithila with 10,000 soldiers, and Ram is forced to use the biological weapon Asurastra by Viswamitra, even though its usage is forbidden by Lord Rudra. The Lankan army is defeated and Raavan escapes on his helicopter, Pushpak Viman. Ram returns to Ayodhya and decides to take a 14-year exile as punishment for breaking Lord Rudra’s rule about the weapon. Sita holds a grudge against Viswamitra for forcing Ram to use the weapon and never speaks to him. Together with Lakshman she joins Ram on the exile, but enlists help from Jatayu and his men, to protect Ram and supply the trio with the anti-ageing drink, Somras.

Numerous incidents take place during their exile and thirteen years pass by. One day, with Ram and Lakshman out hunting, the camp is attacked by Raavan and his soldiers. Sita rushes to help a wounded Jatayu but loses the fight against so many soldiers. She is kidnapped and carried unconscious into the Pushpak Viman. Once she regains conscious she attempts killing Raavan in the vehicle but is stopped by a woman drawing a blade to her throat. With Raavan being alerted, Sita turns back and is startled to see that it is Samichi.

Be the first to review “Sita – Warrior Of Mithila” Cancel reply