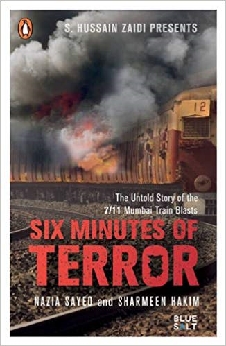 Six Minutes Of Terror: The Untold Story Of The 7/11 Mumbai Train Blasts

The Mumbai 7/11 train bombings in 2006 were one of the deadliest terror attacks the city had seen after the 1993 blast. The attacks orchestrated by the terror outfit Lashkar-e-Taiba and Pakistan’s Inter-Services Intelligence (the ISI) were aimed to cripple the city by attacking its lifeline – the local train. A series of seven blasts in a span of only six minutes rocked the city at seven railway stations, killing 189 and injuring over 700. Six Minutes of Terror is the first investigative book that will present a blow by blow account of the events that led to the terrorist attack, profile the people involved in the blasts as well as describe how the plot was unearthed by the police. Superbly researched, with painstaking detail, the book tries to delve into the minds of the home-grown terrorists who created unprecedented havoc and claimed innocent lives ten years after the horrifying attacks.

Be the first to review “Six Minutes Of Terror: The Untold Story Of The 7/11 Mumbai Train Blasts” Cancel reply