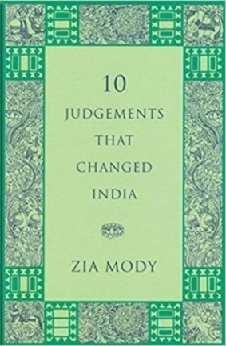 10 Judgements that Changed India’ is a beautiful story of the Indian judicial system and its evolution since 1950, including discussions of some landmark judgements. Anybody who is interested in the Indian judiciary and its functions will find this book an interesting read. This book presents a compilation of 10 essays on some of the most influential judgments’ that were passed by the Supreme Court of India and proved to be life-altering for the common man and the democracy of the nation.

These judgments by the Indian Judiciary proved that the nation’s legal system is not as irresolute as often cited. The author attempts to paint the complete picture of some of the most controversial cases, like Maneka Gandhi versus the Union Bank of India, the Union Carbide Corporation versus Union of India, Mohammed Ahmed Khan versus Shah Bano Begam and Olga Tellis versus the Bombay Municipal Corporation among others.

From the matter of environmental jurisprudence and custodial deaths to the controversial topic of reservations, the author deals extensively with each case in the 10 essays and points out the effects that the Supreme court’s final verdicts produced.

The book describes how the Indian judicial system is capable of impacting the lives of the millions that thrive under this democracy and succeeds in restoring the reader’s faith on the legal system of the nation. The internal affairs that go about in each case, which otherwise escape scrutiny, have been shed light on through the book.