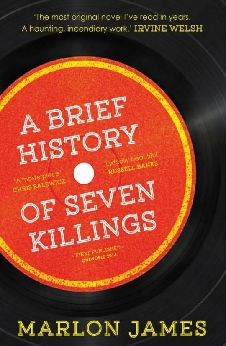 A Brief History Of Seven Killings (2015)

A Brief History of Seven Killings is the third novel written by Jamaican author Marlon James. The novels demonstrate various decades and explores the discovers the attempted murder of Bob Marley in Jamaica in 1976 and its aftermath through the crack wars in New York City in the 1980s and a transformed Jamaica in the 1990s.

The first portion of the novel is set in Kingston, Jamaica, in the build-up to the Smile Jamaica Show and defines politically driven violence between gangs connected with the Jamaica Labour Party (JLP) and the People’s National Party (PNP), particularly in the West Kingston neighborhoods of Tivoli Gardens and Mathews Lane (renamed in the novel as Copenhagen City and Eight Lanes), including participation of the CIA in the Jamaican politics of the period. As well as Marley (who is referred to as “the Singer” in the book), other real life characters portrayed or transposed in the book contain Kingston gangsters Winston “Burry Boy” Blake and George “Feathermop” Spence, Claude Massop and Lester Lloyd Coke (Jim Brown) of the JLP and Aston Thomson (Buckie Marshall) of the PNP.