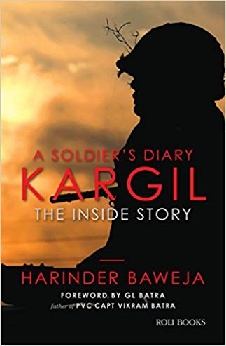 A Soldier’s Diary: Kargil The Inside Story

Kargil, 1999. Two entire brigades of Pakistani army regulars infiltrated Indian territory and fortified themselves before the Indian army even realized they were there. The top army brass ignored warnings, downplayed the threat and the number of infiltrators till it was almost too late. They were also poorly prepared, operationally and in every other respect. Infantry soldiers were pushed up with inadequate maps, clothing and weapons and no information of either the enemy’s numbers or their weapon strength.

With foreword by GL Batra, father of Capt. Vikram Batra, the kargil war hero and recipient of the highest gallantry award, Param Vir Chakra, this is the true story of Kargil as seen through the eyes of one of the front-line commanders. Written in the form of a diary, it offers the first really detailed and exclusive account of the events that led to the invasion and the subsequent battle to retake the peaks occupied by the intruders. Even after almost two decades, the book is still the most accurate account of the many Indian soldiers who laid down their lives in the line of duty.

Be the first to review “A Soldier’s Diary: Kargil The Inside Story” Cancel reply