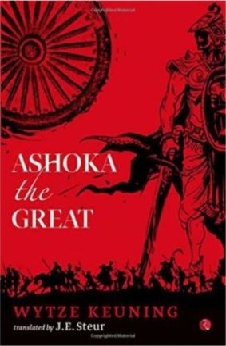 Ashoka The Great chronicles the life of Emperor Ashoka. It is a fictional biography and more accurately can be called historical fiction. The original Dutch version was a trilogy, published separately in three volumes. The trilogy was written between 1937-1947 by a Dutch scholar Wytze Keuning in Groningen in the Netherlands. These three volumes Ashoka: The Wild Prince, Book I, Ashoka: The Wise Ruler, Book II and Ashoka: The World’s Great Teacher, Book III are now brought together and presented in this single volume Ashoka The Great.

The book is an exhilarating, spiritually edifying and deeply moving story of one of India’s greatest emperors. It recreates the life and times of the Mauryas with an authenticity that is remarkable.

The book presents a plausible vision of the past balanced by a captivating story. It is said that a great book if it is to endure cannot do without profound ideas. Keuning perfectly fuses facts and thoughts, Mauryan customs and mores, life and reflection on the meaning of life as seen through the vision of Ashoka’s gurus and the history of personal influences upon Ashoka that marked his rule and legacy. This and more makes it a rare and distinguished book.

Be the first to review “Ashoka The Great” Cancel reply