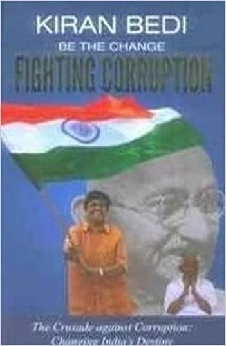 Be The Change Fighting Corruption

Corruption has seeped so deeply into the systems of governance in India that the common man has lost faith in every administrative process. The wide spread disease of corruption can only be cured by a total revamp of its political, investigative and prosecuting system. What we are seeing all around us today is nothing but loot, loot of very high scale to the extent we can’t count the number of zeros and as this started to unfold with the commonwealth games exposure, it got my goat.

I started to be a part of a collective voice which became louder by the day. At times very shrill, not by choice by compelling circumstances. But all for one common cause a well governed India a better India which makes us all prosperous and our next generation secure. This is the spirit behind this collection. If the corrupt can unite for their vested interest, why we, the victims, not unite for our selves? Be the change.

Voted as “India’s most admired” and “most trusted woman” Kiran Bedi is a recognized face in India. She has been a recipient of prestigious decorations, most notable being, the Ramon Magsaysay award in government service and the president’s police medal for Gallantry. She was the first Indian to be appointed as civilian police advisor to the secretary general of the united nations, in the department of peace keeping operations. She holds degrees in law, masters, and a doctorate. She is a Nehru fellow and an author of several books. She has been a National and an Asian tennis champion. She founded and runs two Non-Profit organization.

Navjyoti India Vision foundation, which serve the underserved communities in rural areas, urban slums and prisons. Currently, she is an integral part of India Against Corruption, a movement led by Shri Anna Hazare. Here is a compilation of some of the selected writings and speeches, in which she focused on “Corruption”. These speeches and writing have a perennial inspirational value.

Be the Change 'Fighting Corruption' Reviews