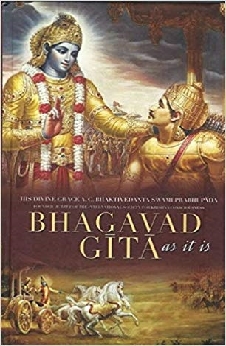 Bhagvad Gita As It Is

Bhagavad-Gita As It Is, provides readers with the translation and commentary of the Bhagavad Gita. It’s the holy Hindu scripture which consists of 700 verses and is a part of the epic Mahabharata. This book stresses on the Bhakti Yoga more than others, which has made it very popular in comparison with other translations among devotees and followers.

The book is written to comply with the traditions of the Gaudiya Vaishnava, preached by Caitanya Mahaprabhu. Each and every verse in this book is presented in the Devanagari script. It’s accompanied by the Latin transliteration, along with the Sanskrit-English meaning for every word. The verse is also translated in English for easy understanding.

The commentary by Prabhupada can be found throughout the Bhagavad-Gita, which is based on numerous works based on the Gaudiya Vaishnava traditions. These works include Ramanuja Bhasya, Visvanatha Chakravarti Thakura’s Sarartha-varsini-tika and Baladeva Vidyabhushana’s Gitya-bhusana-tika in Sanskrit and Bengali commentaries by Bhaktivinode Thakur. This book speaks about a way of life where the society is divided into 4 varnas, Brahmana, who are intellectuals, Kshatriya, who are administrators, Vaishya who are merchants and Shudra, who are workers. It further advocates that people don’t belong to a Varna by birth, but by the qualities they possess and develop.

Bhagvad gita as it is Reviews