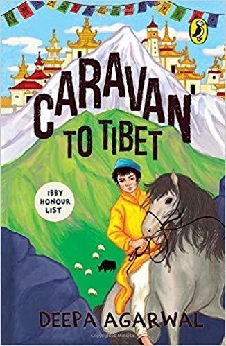 In the last years of the nineteenth century, a caravan of traders sets off from the high hills of Kumaon, India, for Tibet. They traverse dangerous passes and brave blinding snowstorms, in order to carry on their traditional trade in the Tibetan markets. Among them is fourteen-year-old Debu’s father. Many days later, when the caravan returns, Debu is heartbroken to learn that his father was lost in one of the treacherous passes. Somehow he cannot believe it, and when a Tibetan trader turns up in the local market wearing an amulet remarkably similar to his father’s, he is convinced that his father is alive, somewhere in Tibet. Debu joins the next caravan to Tibet to look for his father, little knowing he is setting out on the most perilous, yet most exciting journey of his life. The adventures follow thick and fast?a forced stay in a monastery with a young lama who takes a fancy to him; his capture by a band of bandits led by the cruel, mysterious Nangbo gifted with magical powers; a stay in the goldfields of Thok Jalong; and finally ending with a heart-pounding, breathtaking horse race.

Be the first to review “Caravan To Tibet” Cancel reply