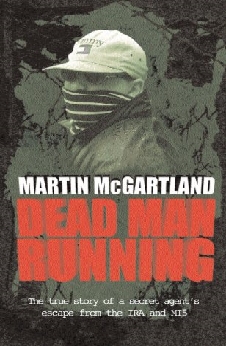 Dead Man Running: A True Story Of A Secret Agent’s Escape From The IRA And Mi5

For more than four years Martin McGartland risked his life working undercover as a British agent inside the Provisional IRA. His first book FIFTY DEAD MEN WALKING describes how he was kidnapped by the Provos and taken to a flat to face interrogation and torture, knowing that execution would follow. So, in a desperate bid to save his life, he threw himself from a second-floor window of a block of flats and somehow, miraculously, survived. DEAD MAN RUNNING follows the extraordinary life of Martin McGartland after he re-settles on the mainland and assumes a new identity. It tells of the discovery that his abduction by the IRA was not as a result of Provo intelligence. He had been deliberately sacrificed by MI5. During his years in hiding in the north-east he was stopped, arrested and taken to court on scores of occasions, mostly on trumped-up offences. Poice lied in court in an effort to win convictions. Eventually, the Crown Prosecution Service, advised by MI5, ordered his trial for attempting to pervert the course of justice. McGartland was found not guilty by the jury in just ten minutes. Unbelievably, during the trial, Northumbria Police revealed McGartland’s real name and his new identity.

Be the first to review “Dead Man Running: A True Story Of A Secret Agent’s Escape From The IRA And Mi5” Cancel reply