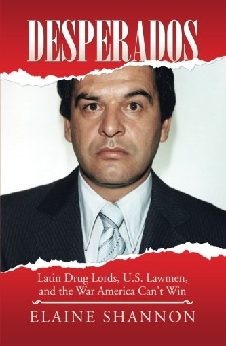 Desperados takes you to the front line of the drug wars. You’ll come face to face to with: Swaggering, flamboyant drug lords who rule over immense empires; Federal police and government officials who are silent partners in the vicious drug trade; A CIA locked in a unholy relationship with the Mexican security police; The Regan administration’s duplicitous and ambivalent fight against narcotics. In Desperados you’ll learn firsthand about the isolation, vulnerability, and courage of DEA agents in Latin America. And you’ll witness the harrowing murder of Enrique (“Kiki”) Camarena, a dedicated agent who tried, against all odds, to secure one victory in this endless war. “A breathtaking, behind-the-scenes look at one of the major problems of our time” -The San Diego Tribune “Fast-paced and meticulously documented…reads like a thriller.” -The Village Voice