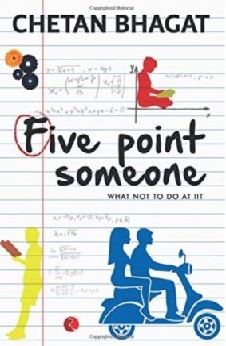 Five Point Someone – What Not To Do At IIT

Five Point Someone is a story about three friends in IIT who are unable to cope.

The book starts with a disclaimer, “This is not a book to teach you how to get into IIT or even how to live in college. In fact, it describes how screwed up things can get if you don’t think straight.”

The book is narrated by Hari, with some small passages by his friends Ryan and Alok, as well as a letter by Hari’s girlfriend Neha Cherian. It deals with the lives of the 3 friends, whose elation on making it to one of the best engineering colleges in India is quickly deflated by the rigor and monotony of the academic work. Most of the book deals with the numerous attempts by the trio to cope with and/or beat the system as well as Hari’s fling with Neha who just happens to be the daughter of Prof. Cherian, the domineering head of the Mechanical Engineering Department of their college. It takes some dark turns every now and then, especially when it comes to the families of the protagonists. Most of the action, however, takes place inside the campus as the boys, led by the ever creative Ryan, frequently lamenting how the internationally lauded IIT system has stifled their creativity by forcing them to value grades more than anything else. Uninspiring teaching and numerous assignments add to their woes, though the boys do find a sympathizer in Prof. Veera, the new fluid mechanics professor.