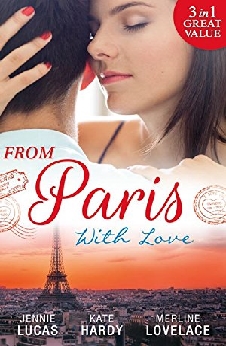 From Paris With Love: The Consequences Of That Night, Bound By A Baby, A Business Engagement

What happens in Paris?

The Consequences of that Night

With one disastrous marriage behind him Cesare Falconeri vowed never to marry again, But an indiscretions with his pretty housekeeper, Emma, forces him to break his vow ? for the sake of his heir. Now his new bride will share his bed instead of making it!

Bound by a Baby

Becoming guardian to her orphaned Godson is a tragic honour for Emmy Jacobs. The real challenge will be sharing that honour with Godfather Dylan Harper! Having got off on the wrong foot, Emmy must now somehow get along with the brooding ? and gorgeous ? Dylan?

Devon Hunter is named one of the Ten Sexiest Single Men in Lady Sarah St. Sebastian’s glossy magazine. Furious he plans vengeance ? forcing Sarah to play his fiance on a business trip to Paris. But what began as revenge leads to real desire?

From Paris with Love Reviews

Be the first to review “From Paris With Love: The Consequences Of That Night, Bound By A Baby, A Business Engagement” Cancel reply