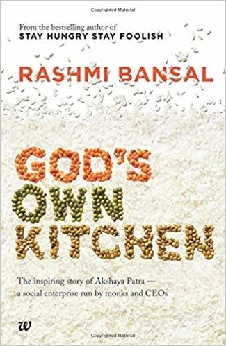 God’s Own Kitchen: The Inspiring Story Of Akshaya Patra

People often asked Madhu Pandit ? “Why did you leave IIT to become a monk?”

Had he followed the conventional path, Madhu Pandit would have been a big-shot in some large corporation. Instead, he was the ‘CEO’ of a large temple. Guided by his guru A C Bhaktivedanta Srila Prabhupada. Propelled forward by the Divine Plan.

A chance meeting with Mohandas Pai inspired Madhu Pandit to use the spare capacity in the ISKCON kitchen. To start a mid-day meal program for 1500 children, in and around Bangalore. Today, Akshaya Patra is the world’s largest NGO-led mid-day meal program, with 27 kitchens across 11 states. Serving 1.6 million hot lunches to government schools each day.

This is the exciting story of spiritualists and capitalists coming together to launch a unique start-up. And taking it to scale. A ‘Made in India’ success story using the head, the heart and a whole lot of soul.

Be the first to review “God’s Own Kitchen: The Inspiring Story Of Akshaya Patra” Cancel reply